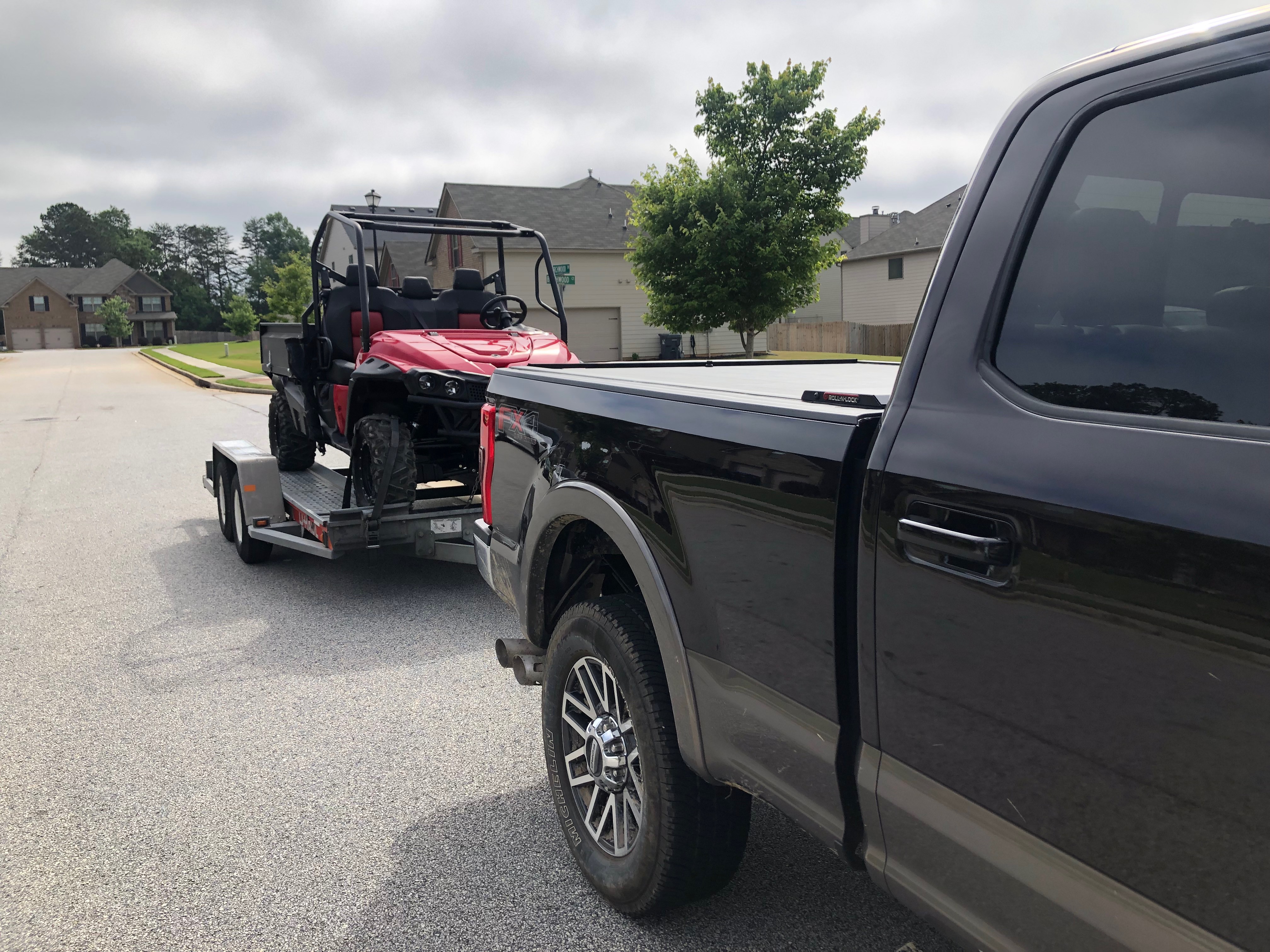 Lately we’ve been renting a U-Haul auto transporter to haul the Mahindra back and forth from the house to the farm. And while for now that is a reasonable expense, we know that some sort of trailer is on our future. Since a tractor of some sort is also on the horizon we have to figure out what sort of trailer might haul both. So here’s my secret: I am not too proficient at backing a trailer. Pulling it, yes. Straight line backing, about a five out of ten. Turning to put in a parking place? Not so much.

And since we have lofty equipment plans, every time we talk trailers, the trailer we’re discussing seems to get longer and longer. At first it was for the XUV. Now it seems like we’re talking 20-30′ trailers or even a pull behind camper. Yeah.

What really sucks and makes absolutely no sense to me is that I have good trailer backing genes. My dad can put a trailer on a dime. That’s not an exaggeration. On. A. Dime. When I was a kid he could, in busy highway traffic, pull beyond our driveway and back the boat in one shot into the garage.

Now occasionally there was a driver that tried to go around him, or traffic showed up around the corner from beyond the curve and there might have been a cuss word or two thrown about, ’cause that happened. But when it was time – Bam! the boat was in the garage. Now that I’m writing this I’m remembering more. To add further complexity to backing the boat in the garage, between where the trailer tires went in the garage were stored many 2×4’s laid in a small pile. So it wasn’t like there was an open garage – the tires went in their little spots straddling the 2×4’s.

I remember a couple of occasions (once I’d mastered or at least gotten more proficient at driving a stick shift), he tried to teach me to back a trailer. One afternoon, he parked the boat at the ramp and threw me the keys to the old suburban and said “Go get the trailer.” “Uh, Dad, I can’t do this,” I remember at least thinking, not sure if I said it or not. I just remember Dad drinking a beer and sitting on the cooler in the boat by the dock, waiting for me to bring the trailer back.

I really wanted to. I really wanted to get it right. But as my skills were not what they needed to be I tried to back up then pulled forward because my angle wasn’t right. Then I pulled forward again. And again, and again, till I bet I was at least a couple hundred yards from the boat ramp, almost to the highway at the bridge. He had to come rescue me. I’m not sure I tried again after that.

I did have a triumph last week with the rental trailer we’ve been renting. I was able to pull it in and back it straight into a parking place – like a champ! The lady was very impressed. She said that she usually took until the end of the day and it took her 40 minutes to back in a trailer (boy can I relate!)

That next week when we rented again I even took the empty trailer to the high school parking lot to practice, first a straight line, then backing into a parking place. The straight line I felt good about. The parking place, not so much. I kept almost jack-knifing the truck and the trailer. But I felt a little more confident.

But the next week, same scenario, I couldn’t do it. I have been watching youtube videos like crazy, I practiced, and knew the 6 o’clock well position and steer in the direction you want to go but there was so much noise and so many people watching me, and the lady at the trailer place was telling me backwards in the parking place so I was just wrong. The man who owns the uhaul place had to help.

I am DETERMINED to figure this out. I just need more practice, right? Or a longer boat ramp.